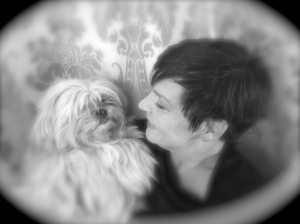 Welcome to Bronwen, third of our guest posters from A Big Stone Rolls Inside. Bronwen came to the workshop with a desire to let go and see what happened. This is what happened…
Bronwen Logan
I was wanting to immerse myself in thoughts about the myth of The Three Sisters in Katoomba. I had read a few accounts of what happened and each was different. So, I thought I’d let my imagination run to a place thousands of years ago where three sisters wandered the Blue Mountains. This is a small piece of what emerged from that. The exercises were not so much about quality of writing but rather continuity of thought.  Getting it down. I enjoyed seeing what I was thinking about these girls and whether there was anything in it for me to take further.
******************************************

At the bottom of the mountain in the valley, where looking up you could imagine the giants of the world had built a garden wall, three sisters walk. They move dangerously close to the borders of their tribe. But here, amongst the dense wetlands are mushrooms to die for. In a line they step, elder sister, middle sister, younger sister, collecting fruits and nibbles along the path.

There is a noise and as elder sister turns she is clobbered by a branch with a large nobbly head. She falls, unconscious. Middle sister watches, terrified into paralysis as younger sister is dragged by her long, curly hair, a full handful of it, down a track and away.

Middle sister spits upon her sister’s face, slapping and crying, snot dribbling. The fear, finally touches inside elder sister, telling her to wake, to see what has become of her youngest charge.

The girls go to father, fast, yet he turns his back on their badness. They went where they shouldn’t and now younger sister is lost to them.

← Happy Yule!
Halibut, Herring and You. →