A little something for the Festive Season

Some of you know I am in the process (and have been for over a decade now) of writing my Great Novel. I won’t attempt a synopsis here, just offer up this cameo of what Xmas is like when you live with the Wicked Witch… 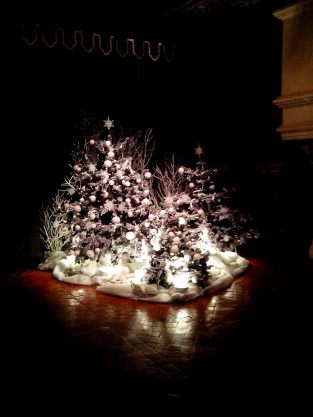 Nothing lurking in those shadows…nothing at all…

Twas the night before Yule

and all through the house

lay in wait for the mouse.

In a silence unbroken

By mirth or by singing

We cowered under blankets

The Whole World was waiting

For God to come down

With baskets of goodies

To hand all around.

The serfs were the scaredest

Each curled in his cot

For the God came to judge

If they’d been good or not.

And most of them hadn’t

Had not even tried

As they fought off starvation

had babies and died.

He arrived in the square

His coat red with blood

He put down his cudgel

and whip with a thud,

And read for a while

And then all at once

He started to smile.

At daybreak we woke

To Presents and Fruit

What happened, we asked

To the Scourge and the Boot?

We hadn’t been good

We ran to the square

And, oh, there what a sight!

Hung up by her heels!

We stood there and ate

“She died for our naughty,

Geez she was nice!”

We feasted that evening

And never asked once

Who’d be Martyr next year.

They huddle together waiting for red-hooded Nick. They are children and exhausted, so they do sleep, eventually and wake to a bright day and stockings full of presents.

“Does this mean we won’t die?”

Sharron munches chocolate thoughtfully. “Sally-Anne Burrows has bin a total cow this term. I dunno, though. Who d’you reckon?”

The family gathers for roast turkey and cigarettes. They talk about poor missing Harry. No-one believes he’s going to turn up now.They hope he’s run away to work on the prawn boats.

“Do you miss your Uncle Harry, then?” asks Aunty Norah. The children look up at me and then nod. If I am completely honest, I like the power. Their little hands in mine, their trusting little faces. Mine to preserve, mine to destroy. I can snap out a black remark and watch the glow fade. I can squeeze their hands too tight and drag them too fast along the pavement, arms at full stretch, shoe-tips clipping and stumbling. Or I can make Sauce Robert. Onions shredded and boiled until tender in butter. Then add vinegar, mustard, salt, pepper and a little wine. It’s traditional. It’s the sauce the Ogress always uses to baste her victims. All those little cutlets. I fetch a bag of hard flesh from the freezer with “HLL” on the label. It could stand for anything, Harry’s Left Leg is just one of many possibilities. Norah pokes her nose into the kitchen.

“Mmm. Smells delicious. I must find out your recipe.” I say nothing and she prods me in the ribs. “You naughty girl, keeping secrets.”

She’ll pay for that. But first she’ll eat. Potatoes and veg and…tadaah!

“Eat up darling, there’s people in Ethiopia who’d be glad of that.”

I pretend not to hear.

The television burbles in the background until,

“Look!” A dead girl in our suburb. Overdose is the mournful police verdict but Garry takes a fierce grip on Sharron’s hand and grins so hard all afternoon one of the endless Aunties asks him if he’s alright.